As of January 2021, the EU Conflict Minerals Regulation became law across all 27 member states. Now is a good opportunity to discuss the extent to which US Conflict Minerals law has positively impacted 3TG sourcing and traceability strategies and compare the merits of both legislations.

In the wake of the Great Recession of the late 2000s that severely affected the global economy, calls for an overhaul of financial regulations increased in intensity and urgency. Introduced in the House in 2009 as the Wall Street Reform and Consumer Protection Act of 2009, the proposition became the Dodd-Frank Wall Street Reform and Consumer Protection Act, which President Obama signed into law on July 21st, 2010.

Inconspicuously buried at the end of the 800+ pages bill, section 1502 on conflict minerals addresses the need to increase transparency in corporate supply chains in an effort to reduce the number of conflict mines in the Democratic Republic of the Congo and adjoining countries, where the sale of highly coveted minerals contributes to funding armed factions and fuel wars, unintentionally encourage child labor or contribute to human rights abuse.

Dodd-Frank 1502 explicitly directs the SEC to issue regulations for companies to disclose their use of conflict minerals.

Disclosure is required if:

Companies that use any of 3TG must conduct a reasonable country of origin inquiry each year to determine whether they source from the countries covered by the Act.

If “no”, or “has no reason to believe”, companies disclose as such, with a description of the actions they took to reach that conclusion on Form SD.

If “yes, or “has reason to believe”, companies must establish the source and chain of custody of minerals through their due diligence process, file Form SD and add a Conflict Mineral Report (CMR) as an exhibit.

What to Include in the CMR?

The due diligence process results in one of three determinations, each with their own set of requirements:

1. The company determines its products are “DRC conflict-free.” The minerals may have been mined in one of the covered countries but did not generate profit for armed groups. In this case, the company must order an independent audit of the conflict report, certify such audit was conducted, and identify the auditor.

2. The company determines its products have not been found to be “DRC conflict-free. The company will then list the products that are not “conflict-free,” the facilities involved in processing the minerals used, and the country of origin of said minerals.

3. The company is unable to conclude its product contain conflict minerals. When the products are deemed “DRC conflict undeterminable,” companies have a grace period of 2 to 4 years (depending on the organization’s size) to mitigate the risks sourcing conflict minerals entail. Actions and efforts to determine the origin of the minerals should be listed in the Conflict Mineral Report.

The objective of the EU Conflict Minerals Regulation is to ensure that importers, smelters, and refiners of 3TG source responsibly and ethically. The ultimate goal is to attain sustainable sourcing for more than 95% of minerals that are today still largely illegally exploited in areas of political unrest to the detriment of local communities.

As of January 1, 2021, the law requires that all importers of raw materials carry out their due diligence, short of which member states will order the companies to comply within a given deadline and take measures to follow up.

To assess their supply chain, companies have to follow a 5-step framework as laid out by the Organisation for Economic Co-operation and Development (OECD).

Has the Dodd-Frank Act had a significant impact on limiting the entry of conflict minerals in supply chains and increasing security in Eastern Congo and neighbors?

Key Findings of the GAO Report

In its 2018 report, the United States Government Accountability Office (GAO) points out the fact that almost all filing companies indicated they had conducted inquiries on the country of origin:

Those results highlight the fact that companies do not yet have full visibility in their supply chain, whether due to insufficient efforts or difficulties engaging suppliers in the inquiry and reporting process. While companies take advantage of the non-enforcement of the regulations by the SEC and forgo filing reports, most are willing to disclose the use and source of their 3TG and take measures to practice ethical and sustainable sourcing.

The Enough Project reports that 495 mines were conflict-free as of 2017, and 253 refiners worldwide have passed audits as of mid-2018. The Project concludes that:

“Dodd-Frank 1502 along with related reforms have led to significant improvements in the transparency of corporate supply chains and to a major reduction in the number of conflict mines for the 3T minerals in eastern Congo.”

Will the EU Regulation on Conflict Minerals Accelerate Progress?

The EU policy largely draws from Dodd-Frank 1502 but also shows more determination to promote transparent and sustainable trade with high-risk areas, not just the DRC and covered countries, i.e.:

Beyond the comprehensive guidance given in the 5-step due diligence framework, the European Union intends to supplement the law with diplomatic measures and development support. However, the London Mining Network has expressed concerns over potential loopholes (raw materials, thresholds under which companies will be exempt). 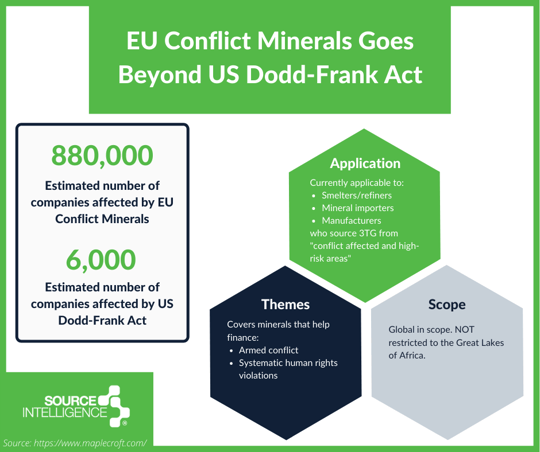 Both Dodd-Frank 1502 and the EU regulation stand to improve supply chain transparency and companies’ accountability for sourcing conflict minerals. While the US covers a wider scope in terms of 3TG presence in products vs. ores or metals only for EU importers, both legislations are counting on companies moving beyond the mandatory reporting to voluntarily adopt and disclose their strategies to implement more sustainable and ethical practices.

Source Intelligence has closely monitored the discussions and progress that led to the EU's Conflict Minerals Regulation. Our already robust US conflict minerals platform has been further improved to help you easily transition into compliance with the European legislation, including:

Allow us to show you the capabilities of our conflict minerals compliance solution today.