A company’s supply chain for products containing tin, tantalum, tungsten, and gold can be complex and can vary considerably in the way it operates, according to industry association and company representatives. Generally, however, the supply chain for companies using conflict minerals begins at the mine site, where tin, tantalum, and tungsten ore are extracted from the ground using mechanized or artisanal mining techniques.²³

The figure below provides additional information on a simplified supply chain for all four conflict minerals:

For artisanal mining, the local processor or trader (which may be an individual or company) purchases minerals directly from the mine sites and typically processes or upgrades them before selling them to an exporter. The exporter may also purchase minerals directly from mine sites rather than going through a local processor or trader. Exporters may carry out further processing or upgrading before exporting materials to a smelter or refiner, where they are either converted into metals or purified into a higher-purity metal.

Even companies that are not required to file disclosures under SEC’s conflict minerals rule will likely be affected by the rule. These companies may supply components or parts that contain conflict minerals to companies reporting to SEC under the rule and may be asked by such companies to provide information specifying the origin of the minerals.

Aside from the supply chain relationship, while information is publicly available about some smelters and refiners, there is little aggregated information available about companies that do not report to SEC under the rule but may trade in conflict minerals.

Examples of these products include tin solder for joining metal, tantalum capacitors for storing energy in cellular phones, tungsten carbide for hardened cutting tools, or gold plating for wires to increase durability and resistance to corrosion. The first-tier supplier has a direct commercial relationship with the original equipment manufacturer, meaning the first-tier supplier sells materials or component parts, which have been aggregated by suppliers throughout the supply chain, to the original equipment manufacturer for final assembly. According to an industry official, in general, component parts manufacturers construct individual parts—such as capacitors, engine parts, circuit boards, and other components—and assemble them into more complex components.

Beyond the first- tier supplier, there are tier 2-, 3-, 4-, or higher-tiered suppliers that, beginning with the raw materials from the smelter or refiner, manufacture component parts that are assembled into more complex component parts as they move from higher- to lower-tiered suppliers in the supply chain, to the first-tier supplier, and finally to the original equipment manufacturer.³⁷

See figure 4 for a simplified version of the supply chain, and the tiered structure of suppliers: 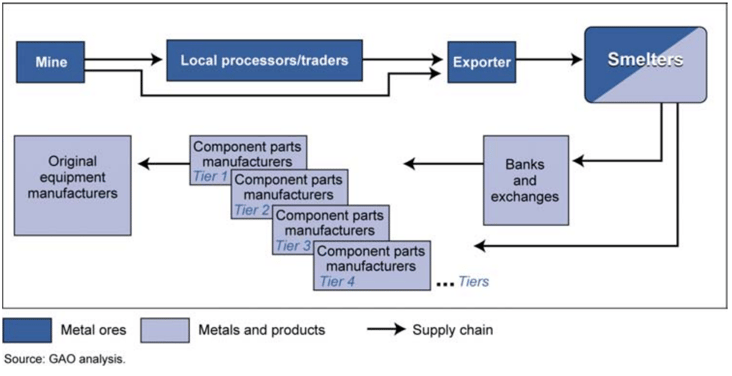 While many companies will likely be directly or indirectly impacted by the rule, some companies that use conflict minerals may not be, partly because

Suppliers that provide products that may contain conflict minerals to companies required to report to SEC under the rule may provide information on the minerals’ origins to those reporting companies that request it.

According to the release, the issuer’s inquiry must be reasonably designed to determine whether any of its conflict minerals originated in the DRC and adjoining countries, and must be performed in good faith. If, after this inquiry, the issuer has a reason to believe that its conflict minerals may have originated in the DRC and adjoining countries, the issuer proceeds to exercising due diligence.

Industry associations such as the EICC and GeSI have created templates for companies to use when contacting suppliers to inquire about the types and origins of conflict minerals in a given product.³⁸

Figure 5 illustrates the flow of information up the supply chain: 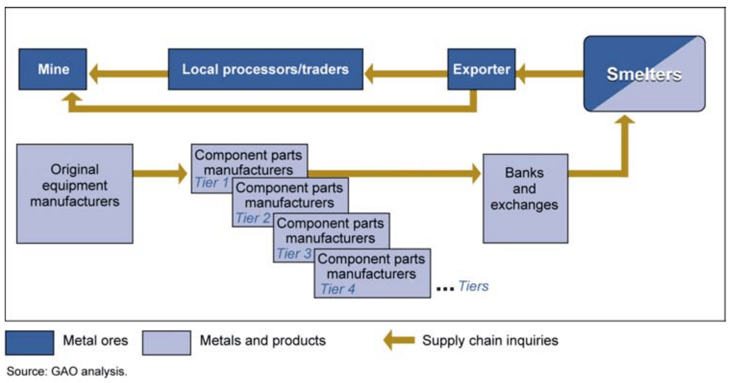 Why GAO Did This Conflict Minerals Study

Initial company disclosure reports to SEC that would enable GAO to assess the effectiveness of the rule will not be due until May 2014. GAO reviewed and analyzed documents and interviewed representatives from SEC, the Department of State, the U.S. Agency for International Development, industry associations, NGOs, consulting firms, and international organizations. GAO also analyzed smelter and refiner information.

This report describes, among other issues:

This report does not contain recommendations.

23. Artisanal mining is a form of mining that is characterized by a lack of mechanization or capital investment.

24. According to OECD, in many instances smelters and refiners do not actually take ownership of the mineral but provide a service and charge a fee based on the amount of

minerals smelted. Ownership of the minerals may remain with the mineral trader, bank, or component parts manufacturer.

25. According to a World Gold Council representative, in most cases refiners are paid a fee to refine gold and the transaction is conducted between the miner, trader, and the bank.

38. According to EICC and GeSI, as of April 30, 2013, the EICC and GeSI activities are now under the Conflict Free Sourcing Initiative, which is an expanded initiative of the EICC and GeSI Extractives Work Group that includes more stakeholders and a wider range of industry sectors supporting the sourcing of conflict-free minerals.

3TG is Just the Starting Point for Supply Chain Investigation

A Conflict Minerals Checklist for Public and Private Companies